Ryder Carroll, the creator of The Bullet Journal, is coming out with a book! It is called:

The Bullet Journal Method: Track the Past, Order the Present, Design the Future

I love the title and I’m really looking forward to reading this. I will definitely blog about it.

I’ve already pre-ordered my copy and you can too!

So I have been a Scrum practitioner for many years now and sure, I was taught that it is called Scrum because of the Rugby term when the team all comes together and forms that circle and then I’ve pretty much always moved on from there because what the heck is rugby, anyway? All that has now changed for me.

This spring my incredible daughter decided that she wanted to join the rugby team. I admit, I was apprehensive. What little I’ve seen of the actual game made me nervous and confused. Haka anyone? I watched a few practices and didn’t learn much. Even the first game was just a confusing mess of girls knocking each other down, but by the 4th or 5th game it started to make sense and I even started to cheer in the right places.

I think it was the 6th game when the girls had a scrum that I asked a more knowledgeable  parent sitting next to me, “When do they have to scrum? ”  and she replied “When forward progress stops.”  And suddenly I got it. Finally.

If you already understand rugby this next part will be very boring and possible not 100% accurate and for that, I apologize. You should skip to the next paragraph.

Like American football a rugby match starts with a kick-off. From there the teams try to move the ball down the field in a series of short runs and passes. When the ball carrier is tackled, the ball is still in play and can be handed off to a teammate or can be stolen by the opposing team. Play does not stop unless there is an illegal move, the ball goes out of bounds, or someone gets hurt enough to need medical attention. In order to score, called a “try”, the ball must grounded in the opponents goal area (the end zone). Points can also be earned in a conversion, penalty, or drop goal, but lets leave that aside for now.

After the light bulb went off I thought to myself, they really should have called it “rugby!” To me the game of rugby is made up of a series of sprints. Just like in the Scrum process the team has to work together and collaborate to meet their goal — to score. Maybe more-so than in most other sports I have watched. Several short runs and passes is the most effective way to score and any player can score. Sounds a lot like User Stories and Tasks. Helping and backing up teammates when they are blocked (or tackled) is essential for success. And (among other things) the scrum in rugby is an opportunity to regroup and re-set, as is the daily stand-up, or daily scrum.

Over the course of the season I watched my daughter and her teammates go from a confusing bunch of girls on the field to a real team working together and scoring a lot. (Thanks in no small part to their amazing coach.) This is much how a Scrum team gets started. It is rocky at first. Lots of adjustments are needed, but after awhile the team finds its strengths and its flow. The rugby team, like a Scrum team, has to make on-the-fly adjustments when unexpected things happen and therefore they both cultivate and value agility. 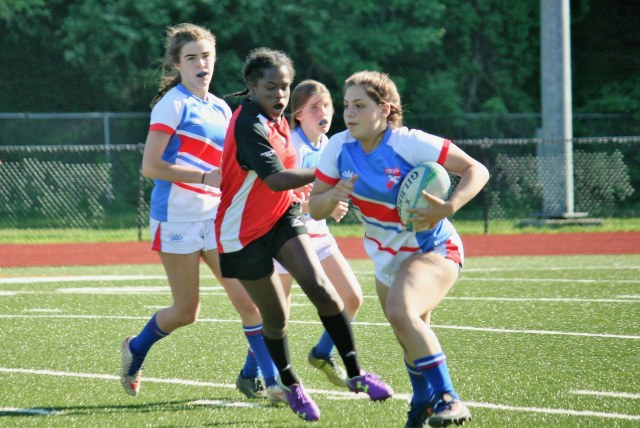 G is for Greg

Drawing and Painting by Greg Robbins

Musings from the sofa

Exploring shades of gray in all things